The Creative Unit has run out in April 2017. This website is no longer updated.
The homo debilis group will continue its research.

under the direction of

“Like gender, like race, disability must become a standard analytical tool in the
historian’s tool chest.” Longmore/Umansky (2001)

The Creative Unit Homo debilis develops concepts and explores methodologies in order to establish dis/ability history as a new approach focusing systematically on pre-modern societies. Our interdisciplinary project is funded by the Excellence Initiative for three years, starting in April 2013. We study phenomena of physical and mental ‘difference’ with regard to our central question: To what extent and in which ways did “dis/ability” or “impairment” constitute categories of difference and of social distinction in pre-modern societies? In accordance with Anne Waldschmidt et al., “dis/ability” is spelled with diagonal slash, indicating that “disability” and “ability” cannot be analysed separately. Unlike “gender”, which has already been established as a central historical category, “dis/ability” is still regarded as a typically modern phenomenon. We, in contrast, who understand dis/ability history as part of an extensive socio-cultural history of the ‘corporeal’, examine specifically how pre-modern societies ‘acted’ within these bounds of corporeality. Consequently, dis/ability is not only to be established as a new, basic category of historical analysis, but has to be extended to pre-modern societies.

However, the methodologies of current dis/ability history, which concentrates mainly on modern societies, cannot simply be transferred to pre-modern times. We need to find a specific terminology and have to develop new concepts that enable us to study systematically the phenomena of pre-modern dis/ability. To this end, our interdisciplinary research network, which consists of medievalists and specialists in Early Modern Studies, attempts to analyse dis/ability with regard to pre-modern forms of living, of relationships and of rulership, to religious discourses and to pre-modern notions of corporeality. The research group develops the theoretical framework for a dis/ability history of pre-modern societies, conducts empirical studies regarding certain key aspects and arranges for scientific exchange on an international level, thus covering a wide range of disciplines and historical periods.

Antecedent to the Creative Unit, the research network „Homo debilis. Social Integration and Challenges of Daily Life for Impaired Persons in Historical Perspective” was founded in 2007 at the University of Bremen. It aimed to study the coping strategies of infirm and disabled people in the Middle Ages and the Early Modern period. Our research provided us with an important insight: Against the assumptions of many scholars within the field of dis/ability history, we argue that in pre-modern societies, the impaired body was widely regarded as a phenomenon of fundamental social impact. The research group takes this result as a starting point for our newly adjusted research project, which concentrates on the following questions:

Thus, research does no longer focus on the impaired individual only, but on dis/ability as a phenomenon of social and cultural impact. Our project is divided into three broad fields of research, all of which interlock by sharing thematic and methodological features. Each field of research, however, allows for a specific approach to the phenomenon of pre-modern dis/ability and centers on certain key aspects.

The research field „Lebensläufe“/Vitae focuses on individuals within their social structures and with regard to their (changing) affiliations, taking into account the human life cycle in pre-modern societies as well as prosopographic approaches. Contemporary concepts of individual abilities and disabilities, of competence and incompetence, as well as notions of physical and mental deviance are of paramount importance within this context. Furthermore, forms and concepts of social agency are explored with regard to their discursive impact, especially concerning argumentative strategies as well as coping strategies.

The second field of research „Soziabilität“/Groups deals with groups, communities and confraternities, including families, monasteries, communes, or courts, in order to explore the inner structure of social groupings within the context of dis/ability. Our central questions are: to which extent did dis/ability play into structuring certain social groups and in which ways did it contribute to the production of social identities?

The field of research „Körperzeichen“/Imagery connects the previous research fields, focusing on notions of physical appearance and bodily marks, from artistic representation to stigmatisation, e.g. caused by corporeal punishment. The impaired body is studied as a fundamental category of perception and as a way to establish difference. Various disciplines, like social history, legal history, literary studies, linguistics, or history of art, are combined in order to explore the imagery of peasants, artisans, merchants, clerics, scholars, soldiers, nobles, or rulers, and to explore how their bodily features added to the formation of social groups. 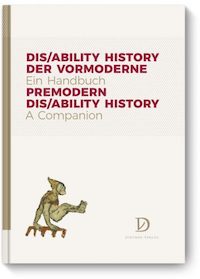